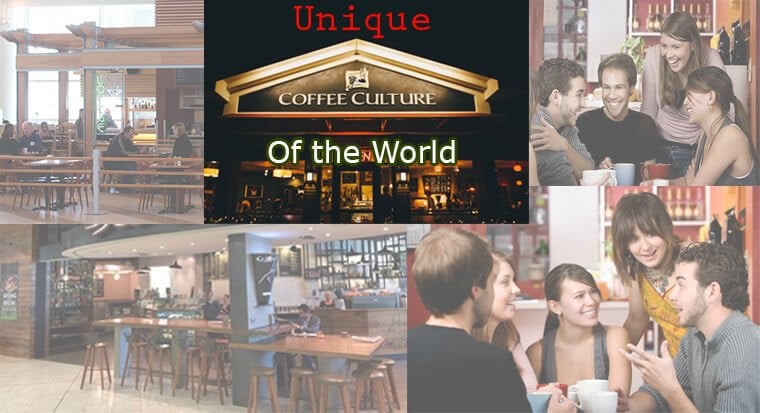 Coffee survives as a universal connection among people of all cultures, no matter where in the world they are. It’s been this way for years, and no matter where you live or where you go, you can always count on being able to ask someone out for a cup of coffee.

That being said, different cultures have adapted different ways of drinking coffee which just open ways for new experiences.

As well as that, there’s almost an infinite array of tastes coffee can have while still maintaining that fundamental taste we love. Here are some unique and cool coffee cultures around the world!

Unique Coffee Culture of the World

Italy is arguably one of the most important countries when it comes to preserving the culture of coffee. This is a traditional country for many things, and coffee just tops the list.

Americans tend to drink coffee for the effect and don’t really pay too much attention to the way it’s prepared. They also usually take it to go. But Italians like to take their time when it comes to making as much as drinking.

Italians have many rules when it comes to coffee, and most of them involve when which type is drunk. Costa Rican coffee might not be something you actively hear about, but it’s definitely been around for ages. In fact, it used to be referred to as the golden bean which was imported by both Europe and the US.

Costa Rican coffee culture refers more to the origin of Arabica coffee than to how it’s drunk and made.

Costa Rica is full of plantations and farms, and most of its inhabitants are proud and content that they preserve their culture and earn their income this way. That doesn’t mean that they don’t drink the coffee they produce. After the work is done, lots of hours are spent home with their families, enjoying the product of their work. One country which you might not expect to have coffee culture is definitely Australia. But rest assured, Australians love their coffee. This might be due to the fact that many Greek and Italian immigrants settled here in the past country, and thus they brought their coffee cultures with them. Aussies gladly took to this, and that’s why they would rather have local, independent coffee shops than Starbucks, for example.

In fact, Starbucks did try to open around a hundred cafes around Australia, but more than half was shut down because Aussies preferred their traditional coffee. What’s more, we can’t forget that they came up with the tasty flat white coffee.

“Fika” might be an unfamiliar custom to us, but Sweden share takes it seriously. It refers to a coffee break, or otherwise time off.

It’s very important for them to have multiple coffee breaks a day, and these are even separate from lunch hours. If you ever find yourself in Sweden, don’t hesitate to ask anyone out for “fika” as they will surely take kindly to it.

It’s part of their daily lives, and they’ll surely appreciate a tourist who respects the custom of lounging and talking while drinking delicious coffee!

Among other things, the Netherlands are famous for their high consumption of coffee. What’ peculiar is that you couldn’t always get a cup of coffee somewhere outside your home.

Today, you can walk into a café or coffee bar and order what you like, but there’s a reason they’re famous for their coffee pads and senseo machines. They used to make their caffeine cups at home rather than anywhere else!

And if you want to end your day on the right note, you should try their specialty- a glass of milk with sprinkles of coffee on top.

Which culture has the best coffee?

8 cities to visit for a great cup of java:

What is the most delicious coffee in the world?

What is the weirdest coffee?